For the 16th consecutive year, Radisson Hotel Group organized its annual Community Action Month – a significant number of actions and activities carried out to support communities around the world. Once again, the group was proud to demonstrate its ongoing commitment to the global partnership with SOS Children’s Villages – taking part in close to 1,000 activities worldwide to provide food, shelter and a better future for the children and young people who need it most.

Radisson Hotel Group, one of the world’s largest and most dynamic hotel groups, is pleased to share the highlights from its 2019 Community Action Month activities around the world. Every year, the group’s hotels – as well as its corporate and area offices – spend the month of June focusing on how they can make even more of a difference to their local communities. This adds significantly to the support they provide all year round as part of the group’s industry-leading Responsible Business program.

This year, the group organized almost 1,000 activities, dedicated more than 50,000 volunteer hours, and raised a more than USD 480,000 in cash and in-kind for SOS Children’s Villages and other local charities.

Radisson Hotel Group runs an ongoing project, encouraging each of its 1,100 hotels to sponsor the upbringing and education of at least one child per hotel – helping to establish meaningful relationships with the SOS Children’s Villages in their respective countries.

Inge Huijbrechts, Global Senior Vice President, Responsible Business and Safety & Security for Radisson Hotel Group, said: “At Radisson Hotel Group, we care about the next generation. We are aware of the positive impact our hotels have on communities as employers and as partners in helping underprivileged children and young people. This is why our hotels and employees help provide food, shelter and a better future together with SOS Children’s Villages. We live in a world where one in 10 children have lost – or is at risk of losing – their parental care, so it is vital to help provide these children with a loving home, a good education and a good start in life. I am immensely proud to see the effort our teams around the world have put into volunteering and fundraising in the last month. Their actions and donations will make a big difference to 9,200 children and young people.”

Patricia Molano, Head of International Corporate Partnerships and Philanthropy at SOS Children’s Villages International, said: “It is exciting to see the various teams from across Radisson Hotel Group being involved and participating in activities to contribute to the lives of children, young people and families around the world. As one of the largest organizations focused on supporting children without parental care and families at risk, at SOS Children’s Villages, we greatly value the support offered by our strategic partner Radisson Hotel Group – especially during its annual Community Action Month. It has become a keystone in our relationship, which we look forward to building on further in the future.” 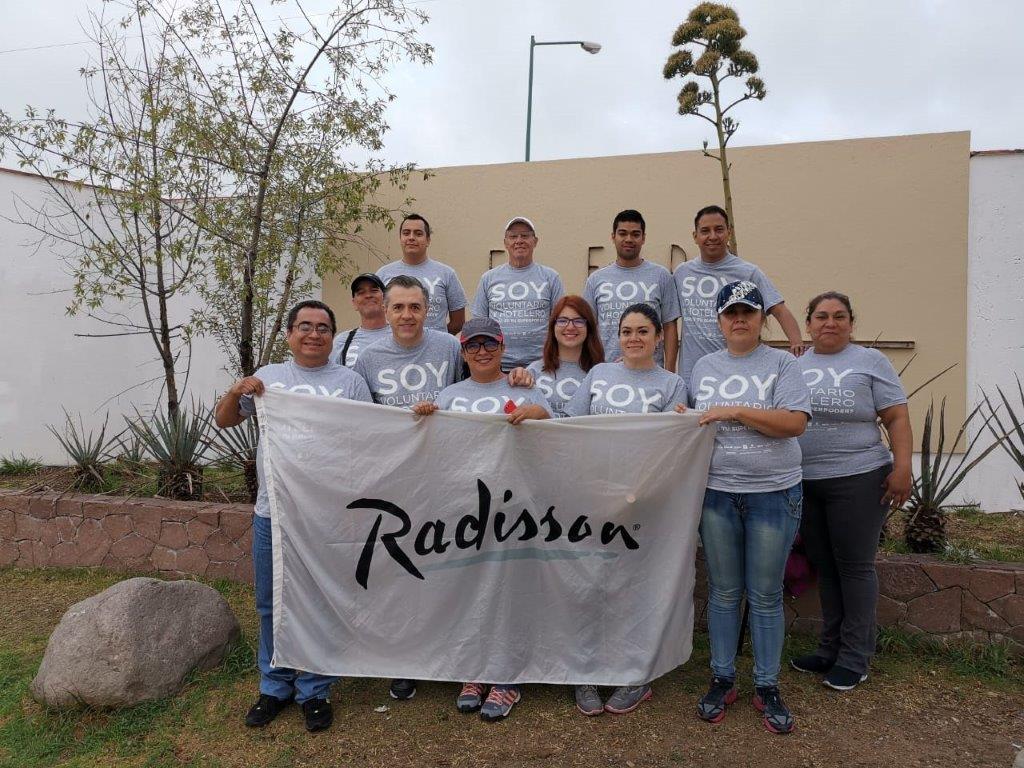 Highlights from around the globe

The Radisson Blu Plaza Hotel Sydney in Australia contributed to Community Action Month in many ways – most notably with its donation box designed to collect tips in a variety of foreign currencies. The team was able to donate a total of 11kg of notes and coins, helping to fund the distribution of toys and educational supplies.

In India, the Radisson Blu Pune Hinjawadi team invited a group of 30 children from the local SOS Children’s Village to a special event at the hotel. This featured a range of fun and exciting activities, a special kid’s menu and the presentation of more than 200 gifts given to the children by the hotel team.

The teams from the Radisson Suites Bangkok Sukhumvit and the Park Plaza Bangkok Soi 18 paid a visit to their local SOS Children’s Village – where they each sponsor a child. As well as providing the children with stationary, toys, games and food, the hotel teams donated the funds raised through their Make A Difference booking program.

People from the three corporate offices in Asia Pacific also took part in Community Action Month. In Singapore, the team volunteered at Willing Hearts Soup Kitchen – helping to prepare, cook and distribute more than 5,000 meals a day. The China team visited the ChenYu Autism Rehabilitation Center. As well as taking part in interactive lessons, they brought gifts and snacks for the children to enjoy.

Hotel and office teams in Belgium came together in Bruges to take part in a treasure hunt in support of SOS Children’s Villages. It was a wonderful occasion that gave everyone involved – including some youngsters from the SOS Children’s Village in Brussels – a different perspective of the historic city, while the day was rounded off with a celebration at the Radisson Blu Hotel, Bruges.

In South Africa, hotel teams worked hard to support the local SOS Children’s Villages. The teams in Cape Town hosted a soup kitchen and donated blankets, while the Radisson Blu Hotel, Port Elizabeth donated a collection of winter clothing and jeans. The hotel teams in Johannesburg visited the SOS Children’s Village in Ennerdale, providing stitching and sewing workshops to the children and helping with ongoing maintenance of the village’s houses.

The Radisson Hotels in Oslo hosted a BBQ attended by more than 120 employees, families and friends. Plenty of raffles took place, with all the money collected (more than €3,000) donated to SOS Children’s Villages.

The Radisson Blu Latvija Conference & Spa in Riga hosted a cinema afternoon for children with movement disorders. The children enjoyed a range of activities – painting with an artist, getting temporary tattoos, eating sweets and snacks, and watching animated cartoons in the hotel’s meetings and events center.

Employees from the Americas Corporate office hosted an SOS Children’s Villages week. Among other activities, this featured a special ice-cream truck and a coin drive fundraiser – with all the proceeds (enough to fund one child for an entire year) going to SOS Children’s Villages. Team members from the corporate office also created a new partnership with BestPrep of Minnesota, putting together an eight-week online mentoring course that will be delivered to vulnerable students in September.

The Radisson Hotel Duluth-Harborview in Minnesota carried out activities to build further on its partnership with the American Indian Community Housing Organization as part of the Duluth Hotels Hearts of Hospitality program. A key part of this was the donation of soap, shampoo and bed linens to those most in need.

The Radisson Fort George Hotel and Marina in Belize participated in a program to feed and look after people who are homeless and suffering with poor mental health. This saw the team provide donations of clothes, towels, soap and food. In addition, the hotel team partnered with a mentorship program designed to improve hygiene among families and children – helping to support close to 190 children locally.

Together, these actions, large and small, have a huge positive impact on people, the community, and the planet.