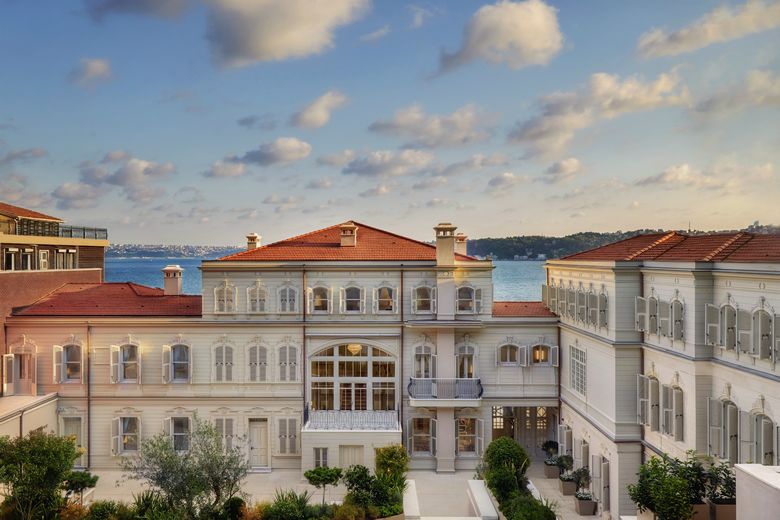 Back to press releases Six Senses Opens on the Legendary Bosphorus Strait, Istanbul

Six Senses Kocataş Mansions, which also incorporates next-door Sait Paşa Mansion, is located in the prosperous Sariyer district of Istanbul’s European side, famous for its “Pearls of Bosphorus” waterfront properties. The urban resort recreates historic architectural features and artifacts from the site’s former 19th century Kocataş Mansions, which were devastated in a fire years ago, paying homage to its original footprint.

The former mansion was owned by and named after Ottoman Minister of Justice Necmettin Molla Kocataş, owner of Kocataş Water. Indeed, just behind is a 2.5-hectare community known for its pure spring water. The site enjoys far-reaching views over the Bosphorus as it begins its last curve towards the Black Sea. This iconic Strait has been sailed since the Roman era and today marks one of the world’s most strategic waterways, separating Europe and Asia.

The 45 generously proportioned guest rooms and suites are divided between the two stately three-level heritage mansions, together with lounges, banqueting and function rooms and a gallery. Inspired by the city’s ability to embrace its contradictions – whether east and west, ancient and modern, or mystical and earthly – the interior design blends traditional local flavors with contemporary Six Senses signature touches.

Through menus that are both nutritious and delicious, based on its Eat With Six Senses philosophy, Six Senses tempts guests who are in tune with or aspire to a balanced wellness-driven lifestyle without compromising on some of life’s finer indulgences. In addition to in-room dining, guests will be invited to sample the specialty menu at the Toro Latin GastroBar. With its elegant décor styled by the restaurateur Richard Sandoval, Toro Latin GastroBar is inspired by Pan-Latin and Asian cuisines, featuring cocktails shaken or stirred by a resident mixologist. The all-day Kahve café is located in a bohemian-style gilded hall offering up sweet and sticky pastries and refreshing Bosphorus views in turn.

An added benefit of the site’s topography is that it allows for several offerings that will tempt travelers and residents seeking an urban oasis, starting with a fully-equipped gym and programming.

True to the brand’s signature hospitality style, GEMs (Guest Experience Makers) will be on hand to help guests relax and reconnect, while enjoying the exciting attractions of the picturesque Sariyer district, sea and city.

In addition to the abundant heritage and cultural attractions that make Istanbul a unique bridge between east and west, Six Senses Kocataş Mansions, Istanbul will also entertain guests by the water. A private boat moored in front of the property on the Bosphorus will be available for guests to take sightseeing trips and excursions.

The historic city center of Istanbul is a short boat ride away and the Istanbul New Airport, the largest hub in the world, is a 40-minute drive by private vehicle provided by the hotel. The stately heritage mansions together with the all-day Kahve café, Toro Latin GastroBar and gym are scheduled to open in November 2019, with more facilities to be added by next Spring.