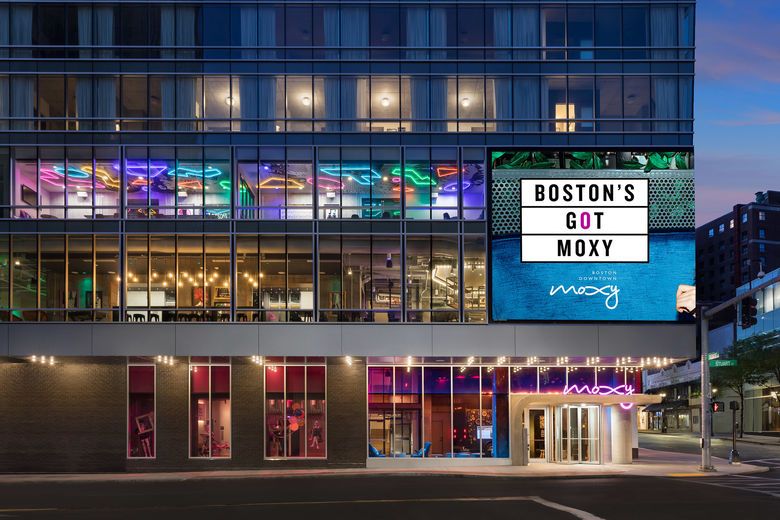 Ideally situated at the corner of Stuart and Tremont Streets, Moxy Boston Downtown is steps from Back Bay and Chinatown. Engaging from the moment visitors cross the threshold, guests are immediately greeted by the hotel’s food truck-inspired photo booth and tunes streaming from indie617, Boston’s indie rock radio station, which broadcasts its morning show live from Moxy Boston Downtown each day.

Guests can either choose mobile check-in upon arrival to the hotel, or can check in at Moxy Boston Downtown’s second-floor lobby, featuring floor-to-ceiling windows looking out over the Theater District. Inviting guests to unleash their playful side from the start, the hotel welcomes visitors with the “Got Moxy” cocktail, featuring Bacardi Dragonberry rum, black cherry puree, and fresh lime. From there, guests can pick up a game of oversized Jenga or Cards Against Humanity while sipping a cocktail at Bar Moxy, or head upstairs to The Mezz, Moxy Boston Downtown’s 24th-floor rooftop lounge, to be dazzled by views of Boston and Cambridge as far as the eye can see.

Theater-Inspired Décor Designed by Boston’s Group One, Moxy Boston Downtown’s industrial chic design pays homage to the surrounding Theater District. Within an envelope of raw concrete, neon lights, and warm oak plank walls, the hotel design captures the grit and rawness of a theater’s backstage, while infusing it with a bold, energetic attitude. Instagrammable spots and selfie walls abound around every turn, including Moxy Boston Downtown’s colorful tree and wing murals, and other custom artwork by street artist Victor “Marka27” Quiñonez, along with a custom ceiling light installation inspired by theatrical stage rigging at the hotel’s entrance. Peekaboo sidewalk window displays showcasing costumed mannequins, catwalks filled with vintage theater decor, stage lighting, neon signs, and pops of Moxy pink throughout give the hotel a spirit that is both vibrant and dramatic.

High-Tech Touches All of the 340 tech-savvy, modern guest rooms at Moxy Boston Downtown feature a queen bed with floor-to-ceiling windows for spectacular city views. Guests looking to be wowed can reserve one of the “Wicked Awesome View” corner rooms, which offer panoramic city views from two sides. All rooms offer peg walls, walk-in tiled showers, and custom furniture that is dual purpose and foldaway, allowing guests to customize their space for work or play. Always-connected travelers will enjoy mobile check-in and checkout, keyless entry, abundant power and USB outlets, and furiously fast and free Wi-Fi. Guests also enjoy Internet TV featuring Netflix, YouTube, Hulu, Pandora, and Crackle, plus a free month of BroadwayHD, and can also stream content directly from their own device on their room’s 42-inch flat-screen HDTV.

Beverage & Food (With a Side of Panoramic City Views)With B&F managed by Boston-based renowned hospitality experts the Lyons Group, Moxy Boston Downtown leads with beverage. Bar Moxy, located on the hotel’s second floor, is a playful all-day restaurant open to the public and hotel guests from early morning through late night, with a menu focused on international flavors and exciting cocktails. Grab & Go essentials are on offer 24/7. Bar Moxy also offers a special late night “Curtain Call” menu for those returning from a night at the theater.

Playful daily programming at Bar Moxy includes “Menace to Sobriety” Mondays, “My Drinking Team has a Trivia Problem” Trivia Tuesdays, “Wine Me Up & Turn Me On” Wednesdays, “Work Hard, Play Harder” Thursdays, and “Kickin’ it Back” 80’s & 90’s style Fridays. On weekends, guests and locals alike can enjoy a “Pimp your Prosecco” mimosa bar.

The Mezz, the hotel’s rooftop lounge, is open exclusively to hotel guests for cocktails and some of the best views in Boston, along with regular programming and entertainment. Listen to the beats of spinning DJs in the Moxy pink DJ booth, or grab a seat and enjoy the glittering Boston skyline while enjoying a cocktail and a light bite. The menu at The Mezz features small plates including petite lobster rolls, shrimp ceviche, and lamb meatballs. The Mezz is also available for private events.

For Work or For Play
Whether traveling for work or leisure, Moxy Boston Downtown offers guests everything they want and nothing they don’t. From valet parking and a business center to cozy spaces for co-working and a full gym for blowing off steam, the hotel is a great spot for business travelers to enjoy. Guests can also receive and redeem Marriott Bonvoy points during their stay.

Moxy Boston Downtown also welcomes groups, both for meetings and for social events. Featuring 2,000 square feet of creative meeting and event space, the hotel offers two meeting rooms on the third floor of the hotel. Playfully named “Stage Right” and “Stage Left,” each features an abundance of natural light from floor-to-ceiling windows and a pop-art-inspired ceiling mural.

8 Mood Altering Tips Your Customers Will Love You For