Carving a Foodie Destination from a Mountaintop Resort 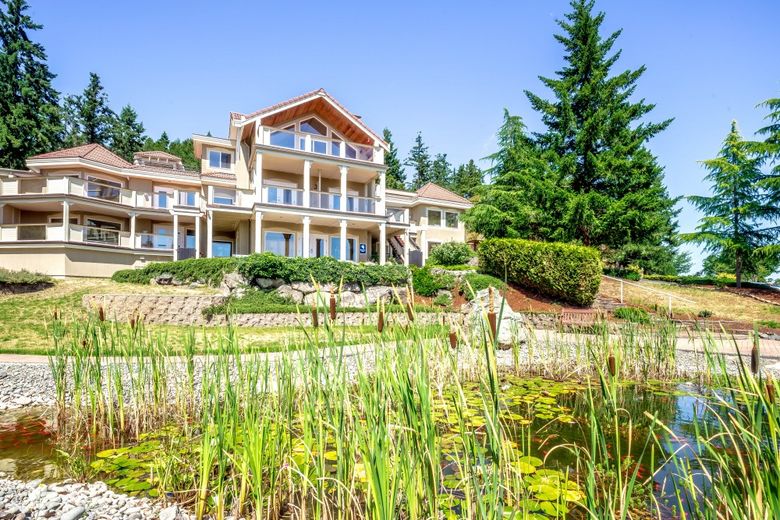 When one thinks of visiting Vancouver Island, the typical trip includes a day or two in the bohemian provincial capital, Victoria, followed by a trek north into perpetually verdant British Columbian wilderness or hugging the craggy, wind-swept western coast with most roads ending in Tofino. Along the way are picturesque mountain ranges, hiking trails and some truly incredible people of all walks of life.

In a blink-and-you’ll-miss-it turnoff along the TransCanada Highway lies a magical luxury resort that I’ve had the privilege of helping this past year. Situated atop the Malahat Range just thirty minutes outside of Victoria, the 40-room Villa Eyrie Resort gazes directly down on the enthralling Saanich Inlet with spectacularly unobstructed views of the entire lower half of the island and the Olympic Mountains beyond.

Yet views alone are hardly a guarantee of success in either hotel or restaurant operations. They only bring guests once but don’t compel them to return. This was the challenge facing Alexander Fischer-Jean, the property’s Hotel General Manager, as well as the resort’s F&B team. Working as a consultant, Villa Eyrie embarked on the audacious goal of reinventing itself as a food-oriented destination first with rooms secondary and all within five months.

Charged with the development of the strategies and tactical plans for this venture was the property’s Director of F&B, Ryan Bissell. An executive chef himself, Chef Bissell was already highly regarded in the greater Vancouver area for his work on multiple restaurant openings, at one time launching seven different outlets simultaneously. As Chef Bissell explained, “The issues surrounding a restaurant in a resort are uniquely different than those of a standalone. Here, you need to recognize first and foremost the needs of the property’s guests before taking into consideration the ability to attract local, restaurant-only customers.”

The scenario Chef Bissell faced was further complicated by Villa Eyrie’s just-a-touch-too-remote location. Although half an hour’s drive for food may be par for the course in other destinations, for Victorians the resort is often an insurmountable distance.

The Malahat represents the first major elevation climb as one ventures out from the lowlands surrounding Victoria and driving it from November through March requires mandatory snow tires for which many citizens don’t even bother, as the provincial capital’s oceanic proximity prevents the city from experiencing a proper Canadian winter. Combined with its seemingly treacherous curves, the Malahat has become notorious for numerous accidents, prompting Victorians to steer clear.

This was all fixed by the completion of a major roadway expansion in 2018, but memories still linger. Thus, core to any F&B strategy was a tactical program designed to create a significant reason to drive and dine.

The development of this approach hinged on available talent whereby remote locations such as Vancouver Island accrue an additional hiring challenge. Hence, it was essential to embrace the creativity of the existing key team leaders including the Michelin-trained Executive Chef Mario Gross, Pastry Chef Matthias Conradi and Executive Sous Chef Andreas Wechselberger. Leveraging their collectively Germanic heritage as well as the mountaintop location, it was only natural to land on the culinary unique sales proposition of Alps Meets West Coast as a means of enriching the resolutely stunning views from every table.

With the senior team in place, attention was directed towards the physical space itself. Summit Restaurant, as it was originally called, was divided into an informal lounge and a main dining room with both primarily differentiated by tabletop settings and divergent menus. To management’s chagrin, the best views were offered by the lounge area – that is, to patrons with a sizeably lower average cover.

An interior designer was therefore required to deliver a more vibrant dining experience, encompassing capital expenses like new tables, carpeting, lighting and wall coverings. For this, McGreachy Design Studio was engaged, helping to recreate the space with an ostensibly modern European atmosphere and also increase the seating capacity from 78 to 94. We called this new soon-to-be-hot-spot Alpina Restaurant. Gone were the antediluvian white tablecloths and stuffy country club feel; in were chic furnishings that brought just as much attention onto the décor as the views from each window.

Next came a thorough examination of the wine list. While the existing list had won local awards, it wasn’t telling a cohesive regional story. Reflecting upon the alpine cuisine theme, the 2,000-bottle cellar was reshaped over a three-month conversion period, as led by Sommelier Sonja Todd. The chosen direction was to provide the most extensive selection from British Columbia’s best wineries, with representation from every growing region including the burgeoning Cowichan Valley mere minutes north from Villa Eyrie.

Moreover, all of the wines at Alpina Restaurant would not be available at any traditional liquor retailer in the province, thereby offering a drinking experience unlike any other eatery. With over 200 different labels on the menu, a La Ver de Vin wine recorking machine was also added to ensure that over 50 of these vintages could be served by the glass for guests to partake in highly bespoke flights at any hour of the day. Lastly, a couple dozen Old World wines were selected from regions in and around the Alps as contrast and to further augment the restaurant’s theme.

Beyond the wine list, other beverages then came under close scrutiny. The coffee contract was transferred to a local roastery called Drumroaster which created custom blends for Villa Eyrie, while the Metropolitan Tea Company, based out of Toronto, was chosen to provide a diverse assortment from its luxury METZ product line. Next, Hoyne Brewery, also on Vancouver Island, was given several brew taps and local Phillips sodas were stocked in the resort’s guestroom fridges. Other local producers including Sheringham Distillery, Ampersand Distilling and Sea Cidery were enlisted to provide even further regional specificity. Lastly, a non-alcoholic cocktail program was initiated using Seedlip Non-Alcoholic Spirits.

Turning our attention back to the food, Chef Bissell started by identifying local suppliers who could provide consistent volume and quality as well as seasonal highlights like spot prawns in the early summer months. Working with Chef Gross, an array of candidate dishes was developed, tasted and costed. One of the particular challenges faced was establishing price points for appetizers and mains on the dinner menu, with the concern centered upon finding the appropriate balance between portion size and selling price while also maintaining a target of 35-38% food cost. In more than a few instances, modifications were necessary and menu items altered to achieve this desired outcome.

In addition to a full a la carte menu, Alpina Restaurant now features both a five-course chef’s tasting menu as well as a three-course prix fixe, both with the option of accompanying wine pairings. Cuisine standouts include wild BC morel risotto, honey-crusted duck breast and open-faced seafood lasagna. Complementing this are world-class baked goods and confectionaries – all made in-house – which comprise rhubarb strudel with pistachio gelato (when in season), savoury goat’s milk cheesecake and a chocolate platter for two.

As staffing is tight, crosstraining of the team was an essential component to realizing success through prompt service delivery and the ability of any staff member to passionately discuss the food or make wine suggestions. This was the responsibility of Morgan Watson, the Restaurant Manager.

The immediate goal through all this was to achieve a $60 per cover for food with an extra $30 per cover for beverage. Not there yet, the restaurant is nonetheless well on its way with food sales already 30% ahead of this time last year.

At present, weekday dinner covers often reflect room occupancy at Villa Eyrie with a $35 lunch special developed to grow within this gap. Contrarily, Friday and Saturday nights are starting to attract substantially more locals, and this is expected to rise commensurate with both targeted advertising and word-of-mouth.

Furthermore, the resort has always been well-known for its Saturday and Sunday brunch and here is where the culinary team sought to be more conservative in approach as the outlet was already averaging about three turns per day. The solution was thus to convert to a buffet service during these crunch periods – a move which has generated even more customer praise.

Alpina has come a long way in a very short time from concept to opening. This included the physical changes, new suppliers, altered strategies, changes to the wine program, menu testing and launch promotions. Since the launch in the second quarter of this year, almost every review of those posted on Yelp, TripAdvisor and OpenTable has been five stars.

Though there are many challenges yet to come including the late-summer launch of a second dining outlet called Senna Bar & Lounge, it is clear that Chef Bissell has a good hand on the tiller. As he states it, “The true test of any restaurant launch is not in the first week, month or quarter, but in the ability to remain consistent to your core values. I am grateful to every member of my kitchen and waitstaff who have embraced our vision of being the best on Vancouver Island and amongst the best in the whole country.”