One of Liverpool’s most iconic independent brands, Hope Street Hotel, is to complete its transformative development in Spring 2020. The city’s original boutique hotel will be extending into and building upon the adjacent 1931 Grade II-listed premises, originally The Royal School for the Blind, seamlessly combining some of Liverpool’s finest old buildings with a contemporary guest experience. This will mark the independently owned hotel’s second expansion since opening in 2004 and will bring more of its unique offering to the city, demonstrating Hope Street Hotel’s continued role in the regeneration of Hope Street and Liverpool’s Georgian Quarter.

With distinctive and complex architecture alongside sympathetic interior design, Hope Street Hotel’s new development will add 62 new rooms including 15 suites, a clubroom, a new gym, and an extensive spa, called Hope Street Hotel Spa, which will include an indoor swimming pool and indoor-outdoor vitality pool. There will also be Liverpool’s first hotel cinema with 40 seats and its own bar, a room with exposed pitch pine roof trusses, six arched 1851 windows and Cheshire pink brick walls. A new fifth-floor event space which will have two terraces – one overlooking the city centre and the other over the Metropolitan Cathedral – will also be created as part of the development. 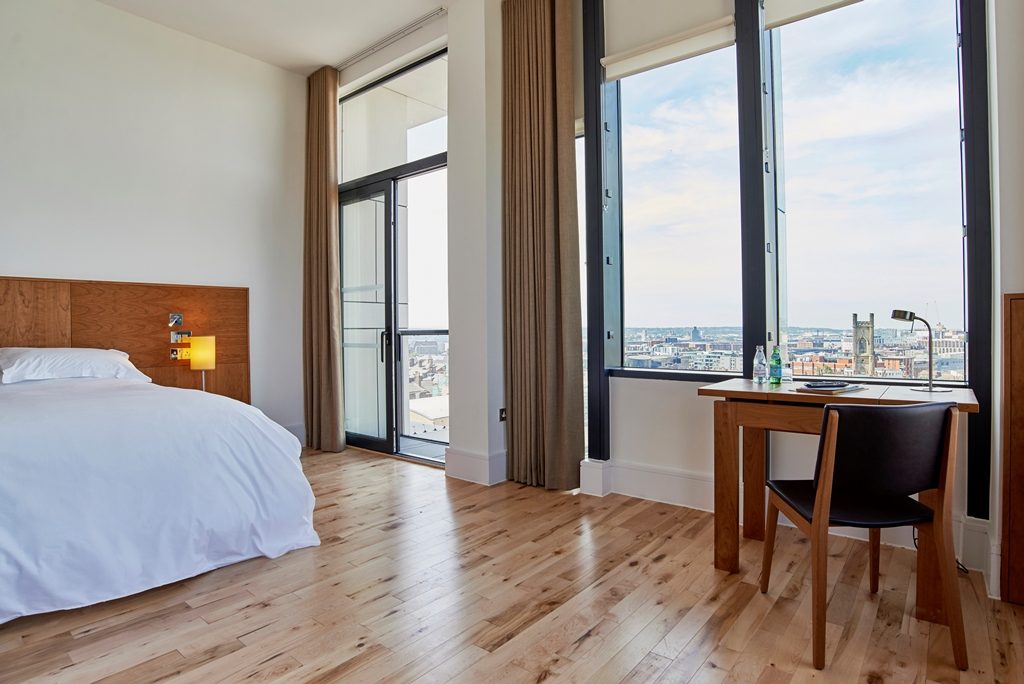 Opened and developed by Dave Brewitt, a local resident since 1981, Hope Street Hotel has grown three-fold in the last 15 years, and has become a firm favourite for locals and visitors to Liverpool. This latest project has been a complex build, bringing together buildings from four different eras, over four different footprints and resulting in more than 30 different floor levels. The whole development has been undertaken whilst keeping the existing hotel open.

In keeping with the existing hotel, the new additions will continue the considerate attention to detail Hope Street Hotel is renowned for, delivering handsome public spaces. The hotel’s design will evoke a sense of space that complements the original Victorian warehouse interior. Quality features such as pitch pine beams, pink Cheshire brick walls, oak floors, cast iron pillars and picture windows – seen in the original part of the hotel – will be elements carried through each part of the new scheme.

Once completed the whole development will create 30 extra jobs for the city, 20 of which will be part of the hotel’s new spa department. “This latest – and most ambitious – expansion is a tremendously complex project. Threading a new eight-storey building over, under and alongside the listed former Royal School for the Blind, and linking it to the existing hotel has been a mammoth 3-D jigsaw – all done while keeping the hotel open throughout the build.

“I am delighted to have been able to bring the 1851 and 1931 School buildings back into sustainable use. Maintaining original architectural features, we have created new hotel spaces, including 62 rooms, roof-top suites, a spa, a swimming pool, a clubroom, our very own 40-seat cinema and a dramatic new events space on the fifth floor.

Our aim is to remain at the forefront of Liverpool’s hotel offer. This development continues our original ambition to deliver exemplary hospitality on Hope Street.”

Chris Brown, Director of Marketing Liverpool, said: “Hope Street Hotel was a catalyst in changing the city’s hotel offer in 2004, and has remained at the forefront of the sector’s growth over the last 15 years. Liverpool’s visitor economy is in a significantly stronger position than it was in 2004, but that means that competition to attract visitors is fiercer than ever so bold, innovative and high-quality developments like this are key to ensuring we continue to grow. The hotel has a great reputation for truly excellent design and bringing the best out of its historic surroundings, whilst providing all the facilities of a leading modern hotel, and I have no doubt that this latest expansion will further enhance that.”