The Growing Divide Between Urban Areas And Regional Towns 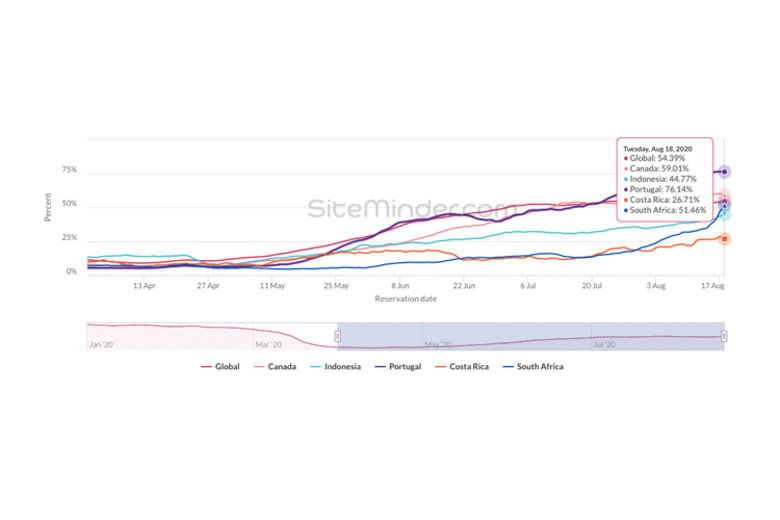 It’s been five months since COVID-19 became a reality for most of us. In that time, we’ve seen hotel bookings in the World Hotel Index drop to below 9% YoY globally, and then show an encouraging and sustained recovery to surpass 54% YoY in July. At a global level, booking levels have plateaued since, but not in every part of the world. While a lot remains unknown, what is clear is that the new behaviours and preferences of today’s traveller are likely to linger for a while yet, if not become permanent changes for some.

As early as May, we at SiteMinder reported on signs that today’s traveller would be seeking an immediate escape from the confines of a building and holidaying, instead, outdoors. Those early signs, detected in the UK, have since come to fruition across the globe as we see more and more travellers opting for a nearby coastal or regional town destination rather than a densely-populated major city.

We see that in:

Additionally, we continue to see countries progress through the new stages of hotel booking recovery:

These trends mean a few things:

Only South Africa surpassed Costa Rica as this month’s fastest riser. The country’s booking momentum is up almost 300% MoM, after the government lifted nearly all travel restrictions. It’s a bold move from a country that’s reported the fifth highest number of COVID-19 cases in the world, but it stands as testimony to the challenges involved with balancing a health crisis and keeping your economy afloat.

In an age of rising choice and accessibility for curious travellers, SiteMinder exists to liberate hoteliers with technology that makes a world of difference. SiteMinder is the global hotel industry’s leading guest acquisition platform, ranked among technology pioneers for its smart and simple solutions that put hotels everywhere their guests are, at every stage of their journey. It’s this central role that has earned SiteMinder the trust of more than 35,000 hotels, across 160 countries, to generate in excess of 100 million reservations worth over US$35 billion in revenue for hotels each year. For more information, visit www.siteminder.com.

Peaceful Destinations to Help You Unwind and Free Your Mind