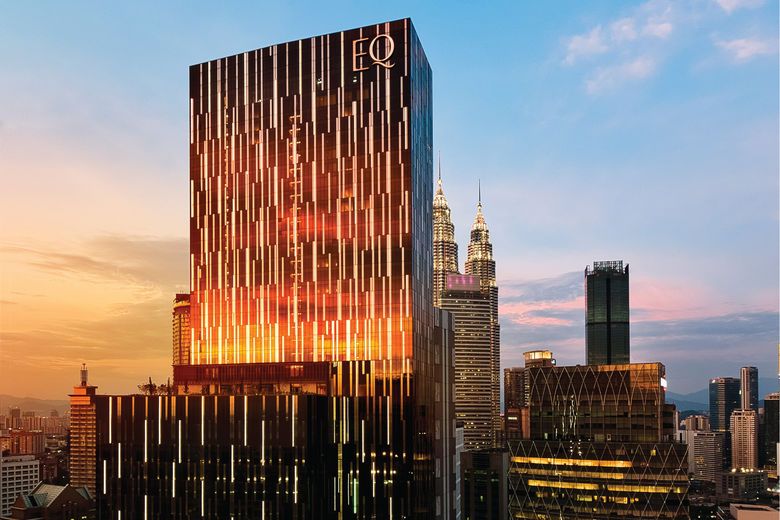 After a redevelopment 7 years in the making, the majestic 52-storey Equatorial Plaza now stands in place of the iconic Hotel Equatorial Kuala Lumpur which was originally built in the 1970s. The first half of the tower comprises grade A+ office premises while the 5-star EQ occupies the upper half.

Since its soft-opening in March 2019, Equatorial Plaza has won critical acclaim with its GBI Gold-certified offices attracting prominent multinational firms including the Malaysia HQ for Standard Chartered Bank. Just as the historic Hotel Equatorial Kuala Lumpur did in 1973, the new EQ has established itself as the top hotel in the city: in less than a year, it has risen to #1 on TripAdvisor with a perfect 5.0 rating. Among the many accolades are the Malaysian Construction Industry and Development Board award for Best Major Building in 2019; Travel Weekly Asia award for Best New Hotel Asia Pacific 2019; and an unprecedented sweep of Gold, Silver and Bronze for Design Excellence in the Food and Beverage category by the Malaysian Institute of Interior Designers REKA Awards 2019.

For over 40 years, Hotel Equatorial has become a part of the social fabric of Kuala Lumpur. V\fith countless memories made in that classic venue, opinions on what the new hotel should be like were inevitably wide-ranging. At the outset, the conceptual challenge was to consider elements that made the original such a favourite and use them as design cues to evoke a sense of familiarity even if everything was to be newer, bigger and better. Replicating the warmth and charm of the original in a substantially larger building was going to be a great test for the design team.

The broad strokes began with making the sense of arrival familiar even if the building is brand new. This meant retaining exactly the same ingress and egress layout ofthe pon’e cochere so that the entrance experience immediately connects with previous Hotel Equatorial guests. Even the vehicular ramps on either side of the building remain true to the original so traffic flow at the new building is instantly recognizable. Crossing the entrance threshold and into the main lobby is where the test of meeting expectations really begins: can the sense of warmth and charm of the original be replicated in such an expansive space?