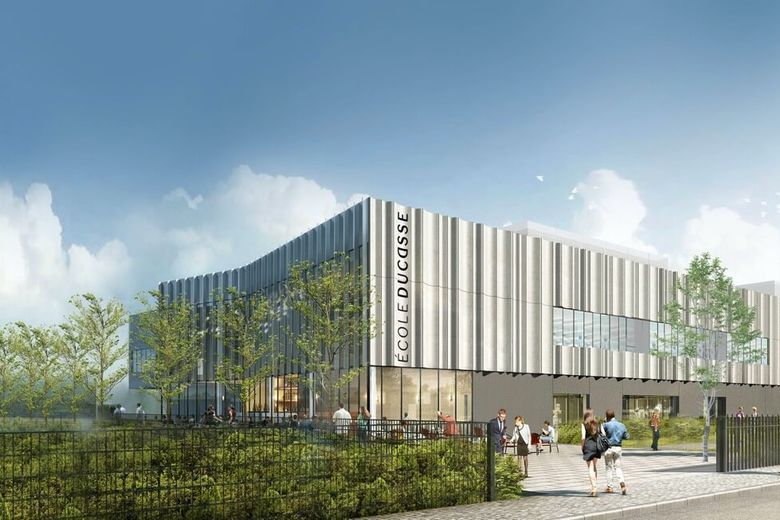 Michelin star on numerous occasions, Meilleur Ouvrier de France Cuisinier 1979, Chevalier de l’Ordre National du Mérite and Chevalier des Arts et des Lettres, and author of many successful books, Jacques Maximin joined École Ducasse as Culinary Advisor and Chef in residence. In his capacity as culinary advisor, the renowned chef, sharing the values ​​of Alain Ducasse, will both breathe his culinary vision into the institution and inspire restaurant menus. Jacques Maximin will also be involved in all training programs (post-baccalaureate programs, programs for people wishing to reorient themselves professionally, programs intended for gastronomic professionals). Masterclass and thematic dinners will allow this emeritus expert recognized worldwide to share his knowledge, his experience, his knowledge and his sense of excellence with students on a daily basis while pushing the limits of this demanding discipline which he masters to perfection. A multifaceted mission of Chef-in-Residence tailored for this creative genius who will thus be able to surprise and inspire the different audiences of Paris Campus every day.

Jacques Maximin began his cooking career in 1962 as an apprentice at Le Touquet at the “Chalut” then moved to Monaco in 1965 as part of the “La Chaumière” teams. Thanks to a unique know-how, creativity and vision, he quickly conquered the most renowned restaurants in France such as Prunier, Le Pré Catelan, the Hermitage in La Baule alongside Christian Willer. In 1972, he joined the Moulin de Mougins alongside Roger Vergé, and then joined Jo Rostang’s Bonne Auberge d’Antibes, 2 macaroons. In 1978, he became Chef des Cuisines of Chantecler, the gastronomic restaurant of the Hotel Negresco in Nice, where he was the first Michelin-starred Chef in a Palace, with two stars obtained in just 2 years. In 1979, he obtained the title of Meilleur Ouvrier de France Cuisinier and in 1982 was elected best young chef in France by Gault Millau. Entrepreneur at heart, he created his restaurant in the center of Nice, in a 3600m² theater, that of Sacha Guitry, where he created an innovative concept: a room instead of the spectators, the glass kitchen instead of the stage for which it will obtain 2 Michelin stars in just 18 months of opening. In 1996, he opened his restaurant Jacques Maximin in Vence, in his own house, where he again received 2 Michelin stars. Having become vice-president of the MOF in 2007 alongside the president, Alain Ducasse, he went back to the kitchen in 2008 with the mission of developing the menu and taking the head of the kitchens of Rech in Paris, the starred fish restaurant by Alain Ducasse. From 2010 to 2016, the chef will run his own establishment, the Bistrot de la Marine, and will obtain 1 Michelin star after only four months of opening. Jacques Maximin will bring to the students and the teaching team of Paris Campus his vast experience and his philosophy, which embodies values ​​such as a sense of excellence, rigor, inventiveness and generosity.

“The arrival of Jacques Maximin and these new talented chefs with rich and complementary profiles is excellent news for our institution. These profiles have in common this sense of excellence, hospitality and sharing so dear to Alain Ducasse. From the management of an establishment, to the mastery of the gesture through the permanent search for new culinary trends, they will bring a lot to the students of our new École Ducasse campus. ” SAYS ELISE MASUREL, GENERAL DIRECTOR OF DUCASSE SCHOOL.

“We are very happy to welcome Jacques Maximin, Guillaume Katola and Thomas Guichard. They will be joined this fall by around twenty passionate professionals whom we met in the presence of chef Alain Ducasse during our recruitment day on September 4 in Meudon. We had selected 40 candidates among 800 candidates for 21 positions in 15 trades, apprentices, as well as permanent positions. “, ADDS JOHAN-BASTIEN POLLE, HUMAN RESOURCES BUSINESS PARTNER AT ÉCOLE DUCASSE.

École Ducasse appoints chef Thomas Guichard as Head of Training and Production at École Ducasse – Paris Campus. With a solid experience acquired in several prestigious establishments (Ritz, Shangri-La, Four Seasons Georges V, Relais & Châteaux …) as Sous-Chef and more recently Banquet Chef and Event Chef, Thomas Guichard will be in charge of all the training programs and the team of chef trainers, while being responsible for production for the various places where the campus lives: cafeteria, food court and boutique. He will also bring his expertise to develop the events dimension of the new campus.

After starting his career in the hotel and catering industry in 1997, Thomas Guichard rose through the ranks and over the years developed his expertise in high-end catering and events. Relying on his skills and determination, the chef subsequently obtained the title of French Catering Champion and World Catering Champion respectively in 2014 and 2015. In his new position, Thomas Guichard, who benefits from expertise extended both in the kitchen and in events will be a considerable asset for École Ducasse – Paris Campus.
After nearly 15 years of experience in high-end catering, spent mainly alongside Alain Ducasse, Guillaume Katola has been appointed to the position of Head of Restaurants for the new Ecole Ducasse campus. The chef will be the head of the site’s two app restaurants. It was in Argenteuil, in Alain Ducasse’s Cooking School, that Guillaume Katola began his career as Assistant Chef Trainer. He then climbed the culinary ranks until he obtained the title of Executive Chef at the famous Michelin-starred Rech by Alain Ducasse in Hong Kong. The chef has previously visited other renowned starred restaurants, in France and internationally, such as Le Jules Verne in Paris, the La Première Air France lounge nestled in the first class lounge at Roissy airport or even The Grill at The Dorchester Hotel based in London.
Determined and talented, Guillaume Katola returns to the field of culinary training in which he started his career 14 years earlier within the Ecole Ducasse itself. Benefiting from the rich experience acquired in Paris and abroad, the chef will help apply the standards and the high level of requirement he has known since his beginnings in gastronomy in all circumstances.

École Ducasse is a network of schools founded in 1999 by the multi-starred Chef Alain Ducasse dedicated to the transmission of unique French know-how of excellence in cooking and pastry making. École Ducasse consists of 3 schools in France: Paris Studio, Paris Campus and the École Nationale Supérieure de Pâtisserie; and 2 international schools (Philippines and Brazil) united around a desire to share a passion for taste with seasoned professionals such as passionate amateurs, adults in retraining or students. The large portfolio of programs aims to meet all training needs: from short programs for experts or amateurs to intensive training of 2, 4 or 6 months, up to 3-year post-baccalaureate Bachelors in culinary arts and in pastry arts. École Ducasse is a network of schools belonging to the Sommet Education Group, a major international player in training in hospitality and culinary arts. Elise Masurel has been appointed General Director of École Ducasse.

Leading Hoteliers Share Their Strategies for Navigating the COVID-19 Pandemic