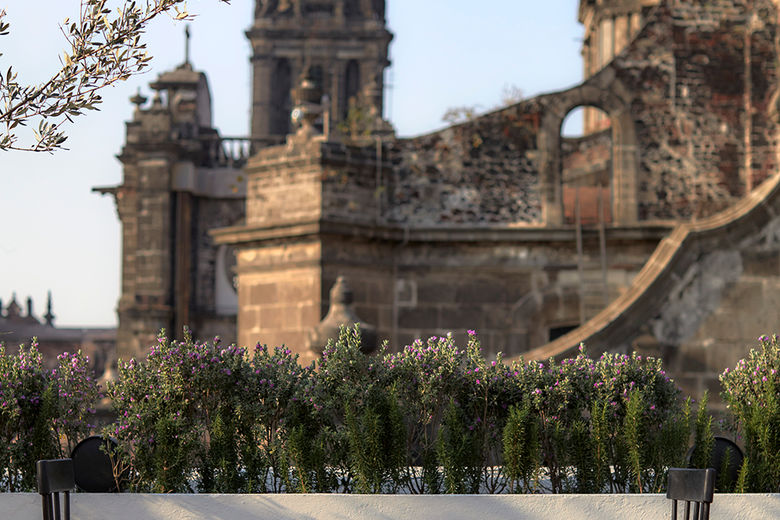 Berlin – Since opening its doors in summer 2020, Círculo Mexicano has captured the hearts of the neighborhood through the immaculate design for which Grupo Habita is known and its contribution to the local social scene. Here, 24 rooms and suites are housed in a traditional ‘patio house’ in the storied Centro Histórico of Mexico City. Conceived with the mission to be a neighborhood cultural haven, the team is now backing up the claim with the launch of the pop-up concept ONA Le Toit, by the celebrated team behind Paris’ ONA. From April 16, 2021, for one month only, Chef Romain Tischenko (Le Galopin, La Cave à Michel) will bring his signature French bistro ethos to the elevated dining scene of the Mexican capital city. www.designhotels.com/circulo-mexicano

Running from April 16 to May 16, 2021, Chef Tischenko—a fixture of the Parisian food scene—will preside over a program that will use only ingredients sourced from all around Mexico. Crafting a six-course tasting menu, he will marry French technique with regional supplies. First launched by Luca Pronzato in 2019, ONA offers a new platform for young gastronomy talents to express their creativity and further their development. For this project, Pronzato has hand-picked Tischenko for an exploration of Mexico’s rich food culture defined by an ever-evolving menu and ample open-fire cookery. Drawing on his experience at ONA’s pop up in Lisbon from 2019 to 2020, Tischenko is bringing the same whimsical mentality to ONA Le Toit. “A temporal project like this is ideal for the creative nature of a chef—it allows you the freedom to do whatever you want and to keep experimenting,” says Tischenko. “I’m coming in with no fixed ideas about what I want to create and will let the discovery guide the process. I want to explore the cuisine from the inside. I love the way of eating in Mexico—grabbing something in the street and being consumed by the vibrancy all around.”

Located on the rooftop, as its name would suggest, ONA Le Toit’s 20 seats (plus a private chef’s table of eight seats) will serve lunch and dinner in addition to a full wine bar serving only natural wines. Designed by Ambrosi & Etchegaray Architects, the restaurant, pool, and bar area are an extension of the hotel’s overarching theme of fluid and seamless design dictated by simplicity. To heighten the experiential side of the project, Luca Pronzato and Grupo Habita have together selected furniture pieces by La Metropolitana, an interdisciplinary design studio founded in Mexico City by architect Alejandro Gutiérrez and industrial designers Rodrigo Escobedo and Mauricio Guerrero. This 12th project from Grupo Habita further cements Carlos Couturier and Moisés Micha’s reputation as bold visionaries led by hometown heart.

Since 1993, Design Hotels has been crafting a portfolio which today includes 300+ privately owned and operated hotels that reflect the vision of independent hoteliers—or “Originals”—with a passion for culturally-rooted hospitality and cutting-edge design and architecture. From the pioneering boutique hotels of New York, Paris, and London, to the rising stars of Shanghai, Mexico City, and Nairobi, to remote mountaintops, hidden beaches, and off-the-beaten-path escapes, each independent hotel in the Design Hotels hand-picked collection is a wholly unique creative expression, steeped in the history, culture, and the nature of its environment.

Founded by Claus Sendlinger in 1993, Design Hotels offers its members insightful travel industry knowledge, from market trend consultancy to international sales representation. The company has its headquarters in Berlin and branches in Los Angeles, New York and Singapore. In 2019, Design Hotels joined forces with Marriott Bonvoy, enabling its member hotels to have both a greater and more selective reach while offering its Community the benefit of the industry’s leading loyalty program. www.designhotels.com | @designhotels | #designhotels